Less More
2 years 1 week ago #5666 by Toni Talvitie
Toni Talvitie replied the topic: Round 2 - BRNO
Was drinking beer while steering right and accelerating and shifting up on T1.
Multifunctional process failed on unknown error and i crashed.

I came from a tougher week and wasn't prepared. Spent a couple of hours driving some of the cars, right before the race, in order to at least get confident that I wouldn't be dangerous to the cars around me. I don't like to drive unprepared, couldn't get rid of that feeling in time and didn't relax.

Managed to take part on the exciting three car battle up front, and I was actively rooting for an accident between Marek and Paul (shame on me

) as I believed that would be my best chance. That didn't happen, but Marek and I found a way to do it ourselves.

Two and a bit laps to go, my brain shut off at a braking point (really can't remember what went through my mind) and I hit a wall hard. Terrible ending. Not happy with either my performance and my result.
Last Edit: 2 years 1 week ago by Matheus Nolli.
The following user(s) said Thank You: Admin

Less More
2 years 1 week ago #5668 by Allan Ramsbottom
Allan Ramsbottom replied the topic: Round 2 - BRNO
Sorry guys internet been down all day,only came on at 19.00hrs.

How do you convert replay files to YouTube video?

These are my settings: 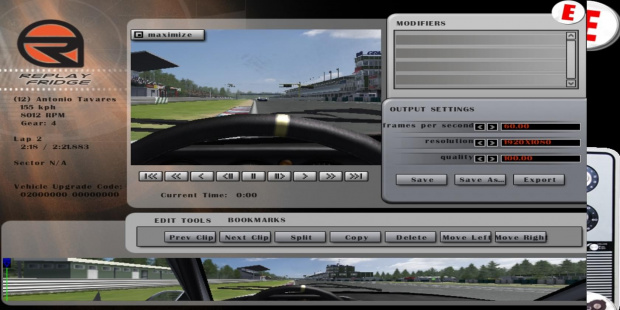 “Racing is life. Anything before or after is just waiting.”

Less More
2 years 1 week ago #5671 by Admin
Admin replied the topic: Round 2 - BRNO
Please leave more comments here. It would be interesting.

Less More
2 years 1 week ago #5673 by Paul Anstey
Paul Anstey replied the topic: Round 2 - BRNO
Qualified 2nd and had a good start but had to fight hard through T1 to keep my position. Had a good run through the corner and got a run on Marek up to T2. Getting in front is one thing staying in front is another all together. The next 10 laps was full on intense focused racing. I kept managing to pull a small gap over Marek who had Matheus glued to his back bumper, but the gap then closed. I had to defend like crazy at times to keep the lead. I knew because I'd done a full race run that my tyres would overheat badly on the left side if I kept up a fast pace but I had no choice. Sure enough by lap 8 the car was beginning to slide through every corner. I knew that keeping the lead was going to be very difficult as Marek & Matheus still looked strong. Then looked in my mirrors and they weren't filled by a Capri or a BMW. I was no on my own and I could breath again. Phew! that was intense hadn't even noticed the laps flying by. From there on I could drop the pace a tad and let the tyres recover.

Well done to Marek and Juan for the other podiums

Thanks to all who took part especially the back markers who didn't hold me up. Cheers and see you all next week.

Less More
2 years 1 week ago #5674 by Jorge Herrera
Jorge Herrera replied the topic: Round 2 - BRNO
Bad start for me. I wasn't fast on the green flag. I had a good pace and I was right behind of the pack, but at some point, when other driver was side by side with me (not remember who, not relevant anyways), I tried to give him a bit more space at the same time I was drifting. Bad Idea. I lost control of my car and hit the wall. Front wing lost and a puncture. After the pitstop, only Ramon was in sight... so I hope to have better luck in the next race.

Qual:
I planned to have heartbeat 180 after the race, but Paul caused I reached that level at the end of qualifying. I knew I have good pace but it was only 10 minutes to make the best laptime, so I exited from pitlane as the first driver. It gave me clear run and I did 1:16.8 early in the first counted lap. Then I was even better with 1:16.6 and took 1st place. Qual was coming to its end and I thought PP is mine, but Paul did it better by... 0.003 s.! I was angry and decided to go out on a limb in my last counted lap and it was succesful. I did my PB and took the pole.

Race:
I knew my pace is competitive with the HGT-aliens - Paul and Matheus, but I was afraid of one thing - sandtraps. That's why I was careful and braked too early in L1T1 and had slower exit speed comparing to Paul and Matheus. I defended well against Matheus but Paul overtook me at L1T2 and took the lead. From that point the race was so intense for me and for us three I suppose too. Paul was on top, I pushed like hell being just on his rear bumper and Matheus was up to 1 s. behind us waiting for our mistakes. During 10 laps I realised how hard the overtaking on that track was. I tried all my best to do it but Paul was sure with his driving. On the lap 11 or 12 I made the second mistake by going on grass so Matheus overtook me after short 2-corner fight. We both were close together and he started to push Paul like me before. On the lap 13 my race line was too optimistic or Matheus entered the corner too slow... anyway it ended with accident between us. I hit Matheus not so heavy but he spun. Paul drove off and I decided to wait for Matheus and let him pass me. The fight between us started again but unfortunately Matheus forgot to enter the last S-corner before the penultimative lap and crashed. Finally I picked up 2nd place and was happy with the result. The best thing for me was my pace which surprised me. I hope it will be the same at Paul Ricard next race.

See you in France.

Marek Archipow [Fireball] wrote: [...] but unfortunately Matheus forgot to enter the last S-corner before the penultimative lap and crashed. [...]

Everyone who wants to continue with Historic GT

This site is in the long term hiatus

Driver's Ranking and Past Events closed
on 31.10.2012 due to moving to Race2Play